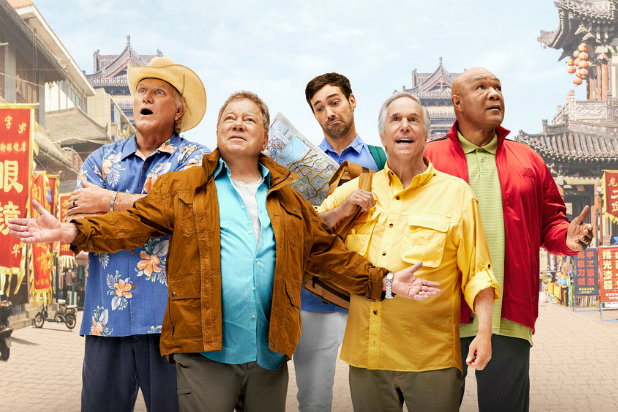 As a partner in a small, indie production company not in LA, I have some disdain for lackluster network programming that some might translate as profound jealousy for a steady paycheck. However, NBC’s Better Late Than Never is one of the funniest show’s I’ve ever seen. I watched the first episode twice, something I’ve never done before, even with my own “stuff”, but I was laughing so hard I was crying, which made my eye makeup run, and then I couldn’t see achaten-suisse.com the screen.

Short story short, senior citizens William Shatner, Henry Winkler, Terry Bradshaw and George Forman (along with a young, male hottie to put everything in perspective), embark on an international adventure, the first offerings being in Asia.

Do note, I have just finished a documentary film on healthy aging, Who Wants to Live Forever, the Wisdom of Aging and it’s made me particularly sensitive to the realm of we aging folks.

Producing this film made me look at the codger oxymoron, and now an expert on such matters, I will call them every more, badass codgers or BC’s.

Shatner leads the pack and he’s a good 15 years older than Winkler – the other two, mere youngsters. At 85 Shatner is totally fawesome all the time.

In our doc, the actor Peter Coyote suggests that we all “age out” from a marketing standpoint. But this show suggests otherwise. With 8 million-plus viewers there’s an innate ability to sell a lot of cars, insurance and the like, hopefully not useless senior supplements the celebrity docs keep pushing (and another topic we tackle with aplomb).

Coyote is a lovely man, a pragmatic Buddhist priest and the author of two wildly entertaining memoirs. He is also a badass codger. I think he would make a great addition to this TV show, traveling with the troupe, contributing much to the mix.

The more I think about it, Better Late Than Never could recruit badass codgers by the dozens. My research on this subject has led me to realize that we are out there in the populous in every-growing numbers. It’s time for BC’s to unite and get things rolling in this world again!