Don Scioli is a graduate of the world renown University of Southern California’s Annenberg School of Communication, where he obtained his Master’s Degree in Cinema. He was part of the team that won an Academy Award® for Best Short film while at the university. He received his BA in English from St. Joseph University in Philadelphia, where he founded the Communications Department and served as Professor of Communications for five years.

He has written, produced and directed several independent feature films and documentaries, over 1,000 television commercials, several television shows, scores of promotional/marketing/informational videos, and interactive CD-ROM, DVD and multimedia projects. Mr. Scioli co-wrote and directed the contemporary theatrical thriller “The Beckoning”, based on the actual events of Sir Francis Drakes’ landing in Marin County. In additional he directed two unique documentary films about the CA wine industry and passionate vintners, A State of Vine and A Passion for the Vine both shot on location in Napa and Sonoma counties.

He is a member of the USC Cinema Alumni, and is a national field tester for Nike shoes and apparel. 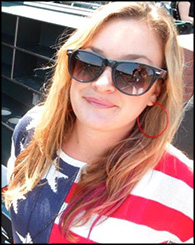 A graduate of the Wine Business Program, the only one of its kind in the United States, and the Master of Business Administration Program at Sonoma State University, Niki is a Producer at Zan Media.

Prompted by her knowledge of the California wine industry, Niki was the catalyst for the company’s recent release, the documentary “A State of Vine” which has been called by experts in the field, “a beautifully crafted work.”

Appearing in her first professional production at 5 months old, Niki switched to the world behind the lens and continues to bring fresh ideas and energy to Zan Media. In 2007 she was responsible for obtaining “Certified Bay Area Green Business” status for Zan Media, and is influential in developing projects that help inform the community on ways to reduce waste, foster sustainability and tread with the lightest carbon footprint possible. She is also a member of the Santa Rosa Young Professionals Network, Sonoma State University Alumni Association, and the City of Novato Steering committee. Niki’s thesis casework on sustainability in the wine industry was presented at the North American Case Research Association conference. Niki and Alex also produced the first ever video case study on Frog’s Leap Winery, which was just accepted for publication by McGraw-Hill She is also an Ambassador to the Style Council of Marie Claire Magazine.